For those who prefer to listen: Coming Soon

Recently, we took over managing a client’s Facebook page, which has, as of writing, roughly 28,000 likes.

Engagement rate for this particular page wasn’t great, with an average of 1.6%.

To be clear: I calculate Facebook engagement rate based on engagements divided by reach, multiplied by 100.

The reason I’m specifically addressing this is because there are still marketers out there who advocate using follower count instead of reach.  In my opinion, using follower count is flawed, since it assumes every single one of your followers is seeing your content (they probably aren’t).

They could be missing out for a number of reasons – they’re not on social media at the time, they’re not shown your post because of Facebook’s formula, or they’ve chosen to block posts from your page.  Regardless, using follower count to calculate engagement rate will only serve to incorrectly skew the outcome.

My client’s in-house social media managers followed Facebook ‘best practices’, like these ideal lengths compiled by Sprout Social.  But something that always frustrated me about these much-vaunted metrics was the restriction on character count for organic posts.

I’d seen longer posts perform better on both Facebook and Instagram, and I found, from personal experience, that they were more engaging than a few lines of emojis and clickbait text.  Text-heavy posts I’d created previously had often done just as well or better than shorter posts.

But, like any good marketer, I wasn’t about to create a strategy based on a hunch.  I started researching, wondering if I could find any insightful articles from Hubspot or Search Engine Journal.

On the Sprout Social page I linked to above, I discovered this:

That seems fairly conclusive.  To give you an idea, this line is 73 characters (without spaces):

“But, like any good marketer, I wasn’t about to start creating a strategy based on a hunch.”

So, according to Sprout Social, you get one long sentence, maybe two short ones.  Right away, that struck me as strange.  So I checked the studies they referenced in their article.

The first one is hidden behind a paywall, which I couldn’t be bothered bypassing.

The second one was indeed a link to a Jeff Bullas post – only the study wasn’t from him, he’d just mentioned it (in 2017, three years ago, which is a lifetime in the world of social media).  The link in his article to the actual study no longer exists; it now redirects to this Salesforce page.  However, according to Jeff Bullas, this is what the study contained: 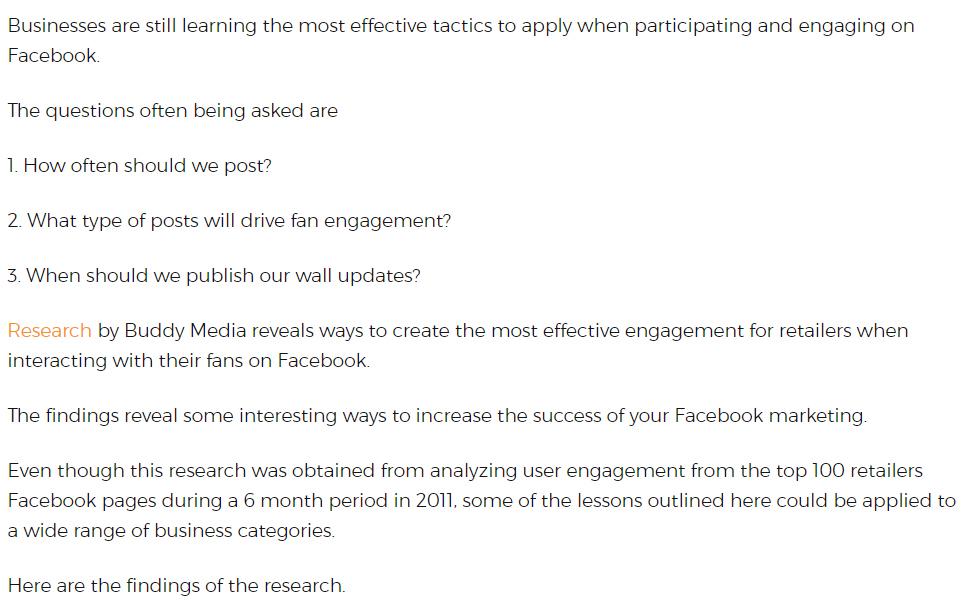 That’s right – the study which Sprout Social were basing their pretty arbitrary character limits on was from:

Aside: Please note that I’m not dismissing the study itself – I’m sure it worked well for its intended purpose.  But that doesn’t mean it should be applied as a golden standard today.

Somehow, Sprout Social felt this data is reliable enough to include in a complete social media character ‘guide’.  And from there, marketers, just like those on my client’s in-house team, were using those recommendations to shape their social media strategy.

Another top-ranking page for “facebook organic post length” from Hootsuite also cited that same study, along with a Buzzsumo study from 2017.  The Buzzsumo study was much better – it analysed more than 800 million posts from 2016.  Surely, then, they would know what they’re talking about?

Sadly, Buzzsumo haven’t actually posted the study.  They haven’t shared the methodology.  They haven’t even included the results.  They’ve shared very general trends, none of which are very surprising.  So we don’t actually know anything about the study, which automatically makes the findings unreliable.  The relevant one was this:

Short posts of less than 50 characters were more engaging than long posts.

Here’s the problem: because we know exactly nothing about what was analysed and how the study was run, it’s likely that the following have been included in the analysis:

All of these posts can get away with short captions and still achieve ‘more engagement’ than longer posts.  Some more questions:

Note: there is an infographic on the Buzzsumo page that apparently summarises the findings, but it’s an interactive iframe rather than an image and currently displaying like this: 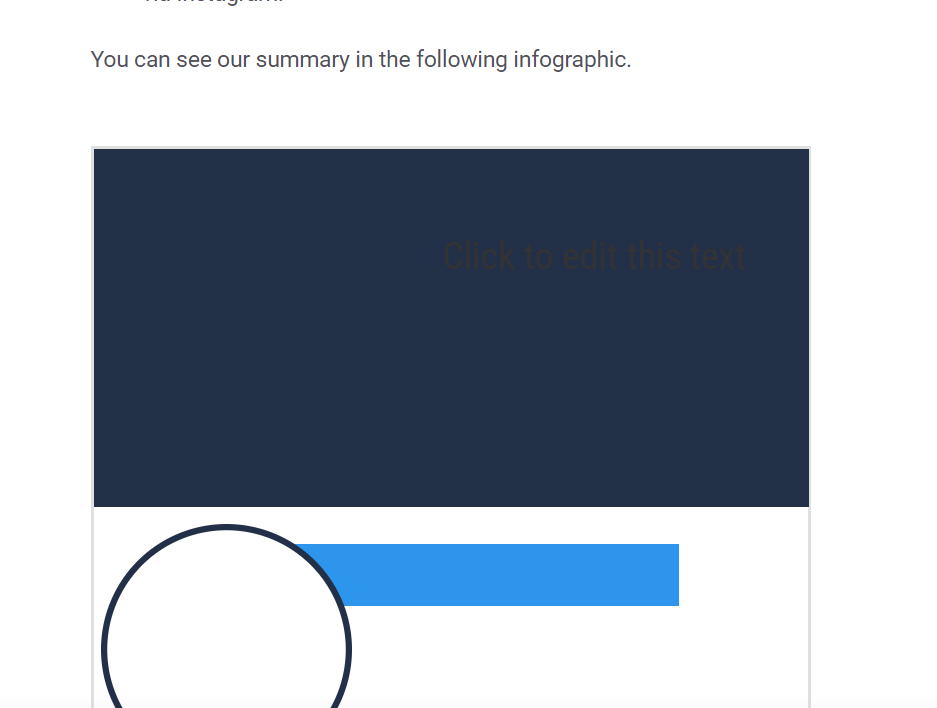 Feel free to comment if you get a working version that contains different information.

Another high-ranking page I came across also cites Jeff Bullas (they actually imply that Jeff himself conducted the study), along with a study from HubSpot.

I like HubSpot – their content isn’t ground-breaking, but it’s generally well-written, comprehensive and reliable.  The HubSpot page linked recommend 40 characters.

So what does their study look like?  Well, they didn’t actually conduct one.  Here, read it yourself: 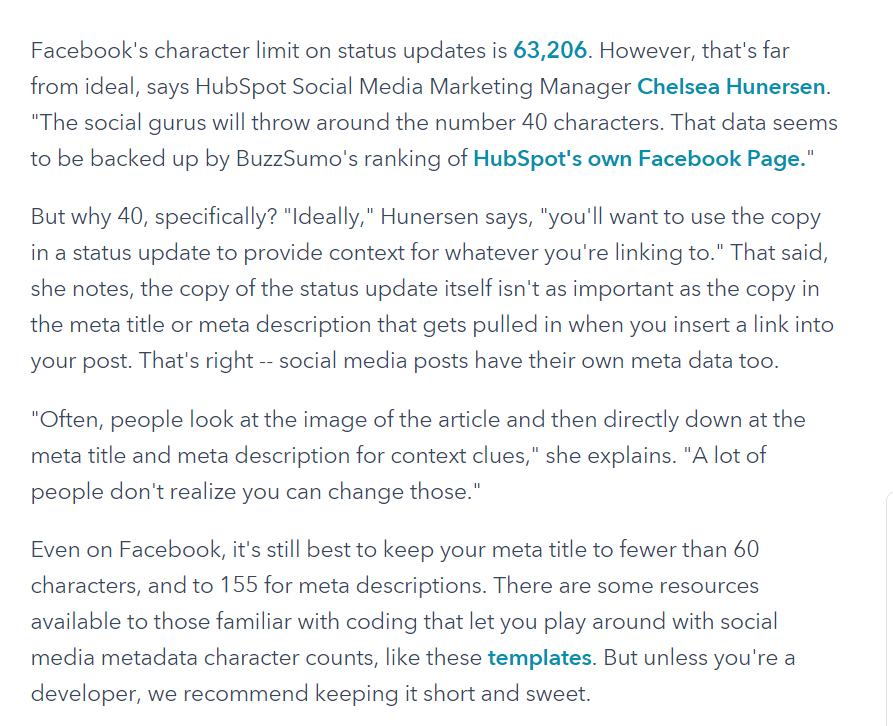 They cite ’40 characters’ based on what unspecified “social gurus” are saying, which their own social media expert then backs up with exactly no data at all.

Aside: For those who are curious, I did click on the BuzzSumo page linked in the above screenshot, and it redirected me to BuzzSumo’s home page.

The final page that looked semi-reliable was from AgoraPulse.  Thankfully, this one was actually a study with more accurate methods, conducted in 2019.

They only analysed three companies (their own, plus two more), and found that shorter posts (under 140 characters) performed better than longer posts.  I don’t have a problem with the study itself, and I appreciate the fact that they also pointed out how unreliable the other recommendations out there are:

The ideal length of Facebook posts is 40 characters—at least according to all the “experts.” But there is a problem with this conclusion: No data backs this up.

At the Social Media Lab, we researched more on this subject, only to find references to data from 2012 and 2016. Old data such as this is not valid in 2019’s ever-changing social media marketing landscape.

Due to the lack of recent, measurable data, the Social Media Lab needed to research the ideal length of Facebook posts. Our hypothesis is purely based on what many of today’s social media “experts” have claimed.

140 characters is significantly more reasonable than 40, and it’s much closer to a length I feel comfortable with.  Ultimately, I think it depends on your audience – as a general rule, I think (unless you have amazing images or videos), sticking closer to 140 characters is a smart choice, especially if you’re just starting out.

But here’s the thing: you need to tailor your strategy based on your audience, and how different post types perform.

For example, I’ve been posting longer captions for our client, averaging out at 457 characters so far (that average will definitely decrease over time – a long post about coronavirus skewed it).  And our engagement rate for those posts sits at an average of 5.53%, up from 1.6% when our client was using shorter posts.

Now, I’m not saying this means longer is better than shorter – I’m saying you need to test different strategies, and that the success of the post is less to do with character count than the quality of the post.  If it benefits from being longer, keep it longer, but don’t include unnecessary words or information.

As I spend more time with my client’s account, I’ll be trialling different strategies to see which ones produce the best results.  I’ve already scheduled a few posts that have significantly shorter captions, because the point of this article isn’t to determine whether shorter or longer is better.

It’s to point out the dangers of setting down rigid guidelines that are based on downright inaccurate statistics.

If you work with social media and you’re reading this, I suggest you review your best practices – are they best practices because you’ve trialled and tested different approaches, or because you read an article on a site that referenced a survey that you’ve never seen? 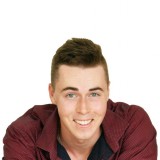 It’s an amazing article in favor of all the web people; they will get advantage
from it I am sure.